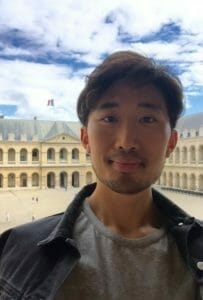 Kenneth’s research investigates the Greco-Roman roots of the critical study of religion and of the human sciences more broadly. He also studies the history of classical scholarship, with special attention to the interrelations of the academic discipline of ancient history and the social sciences of nineteenth and twentieth-century France, Italy, and Germany. His areas of research cover ancient historiography and antiquarian literature, Homer and Homeric scholarship, and ancient religions.

What drew you to the Collège de France? What about it seemed like a good fit for you and your work at the time that you were applying?

I wanted to carry out research at the Collège de France for two reasons. First, my work on the intellectual history of religious thought in the ancient Greek world is deeply informed by the methods of the Paris school of the post-War period, which combined classical philology with French structural anthropology. Being in Paris allowed me to consult the archives at the Collège de France for ongoing projects on various aspects of this tradition; moreover, my host at the Collège (John Scheid) studied with scholars associated with this school of historiography and shared with me personal narratives about its social and intellectual import. Second, being in Paris facilitated research trips to the Bibliothèque nationale, the Bodleian in Oxford, and the British Library in London, where I consulted ancient and medieval manuscripts of commentaries on Homer and ancient mythological compendia that are crucial to my dissertation.

Is there a particular experience that the Collège de France fellowship has enabled, which stands out to you or has proven important for you or your work?

My affiliation with the Collège gave me access to important archives and research centers in Paris, but it was also tremendously helpful when introducing myself to scholars in France and Europe generally. Being connected with the Collège helped me gain entry into other “laboratories” in Paris (e.g., Centre Anthropologie et Histoire des Mondes Antiques) and thus encouraged daily contact with the larger academic community. I was also able to audit courses in anthropology and historiography at the École pratique and at the École des hautes études en sciences sociales. I should also mention that the library at the Collège is spectacular and provided an extraordinarily comfortable working space, which was particularly welcome during the academic year when other research libraries in Paris are overcrowded! Finally, one of the major boons of being at the CdF is of course the annual lectures; I attended not only those of my host but also those of Philippe Descola and Roger Chartier.

You have successfully applied for and held several fellowships now. How have you gone about presenting yourself and your research for each specific opportunity?

I study a part of the ancient world whose primary sources are digitized or readily available in major American research libraries. One of the ways I have justified the need to conduct research abroad is to describe my scholarship not as a straightforward or solitary engagement with ancient texts and objects, but as related to academic work being conducted by communities of scholars in other countries. I try to articulate as explicitly as possible my historical methods and to emphasize how my research might develop if given the opportunity to collaborate with scholars who study similar materials but from different national and disciplinary perspectives with alternative presuppositions and methodologies. I make sure to demonstrate in concrete ways how I can contribute to other scholarly networks and how my own operative assumptions and methods of research might expand as a consequence of working in different intellectual contexts.